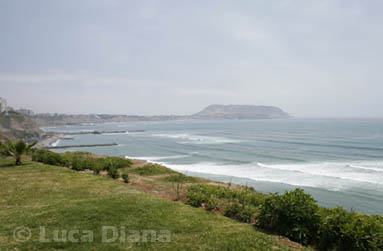 My plane landed perfectly on time at the airport in Lima. Luckily mine was the first plane to arrive at the gate that night as most international flights arrive late night and it’s suddenly chaos at customs and luggage retrieval just after a few flights have landed. It took me about 20 minutes to pass customs and retrieve my heavy duty backpack. Once out of the gates I noticed, in the mass of taxi drivers holding a sign, a man holding a tablet with my name on it. I walked to him and we greeted each other in Spanish. I asked him if he spoke English and after getting a negative answer I thought “Here we go, time to brush up my Spanish.” After nearly two hours of waiting for my friend Lindsey (and discussing all sort of things with the driver, including politics, in what was my first real conversation in Spanish) I was starting to worry that she had not made the flight as she was flying stand-by, but her smiley face made it through the gates and she explained that her plane, regardless of being on time, landed after all the others and therefore it took a long time to pass customs and the luggage carousel. The three of us headed to the taxi with destination our hostel in Miraflores, a nice area of Lima by the sea. Lindsey and I had met nearly randomly just a few weeks before and we still didn’t know if we were a good travel match. I had told a friend that I was going to Peru and her words to me after “Nice to meet you” were “Can I come?” I said “Sure” thinking that she might be joking until I received a text message a week later saying “This is Lindsey, I was serious about Peru” and now she was sitting next to me, in a cab in South America.
We were greeted by the very nice hostel owners and after checking in our quaint but clean room we tried to fall asleep, by now it was nearly 2am. Sleep didn’t happen until 4am but we were already up at 8 to start our discovery of Peru’s capital. 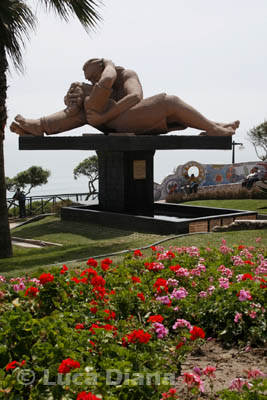 We decided to have a mellow day and after a quick breakfast walked around the shoreline of Miraflores, stopping at parks to take photos and checking out the neighborhood. Walking took us to a shopping center on the edge of a cliff overlooking the Pacific Ocean and we sat at a restaurant where we could taste some local cuisine. We found our plates to be very flavorful, I especially liked the “anticuchos de corazon,” pieces of beef heart roasted in a skewer, which reminded me of something similar from Sardinia. We sat at the shopping center for a while watching the paragliders fly by the cliffs and offering rides to tourists and then strolled some more around the streets. On my flight to Lima I was sitting next to a man from the city who gave me many recommendations about places to see, what and where to eat and even the address of a car rental company. We visited the car rental and asked to speak to the lady whom I was referred to, who turned out to be the owner. She welcomed us into her office and after sitting down we explained that we were planning to visit Arequipa in the south of Peru and Cuzco. Since rental was around $500 with a drop-off in a city other than Lima we expected her to try and convince us to rent a car instead she was adamant on the fact that in Peru people drive dangerously and we should instead take a bus to our destinations. She even made phone calls to the most prominent bus companies to check schedule and prices and we finally decided that exploring the country by bus was the best way for us to see places and meet people. 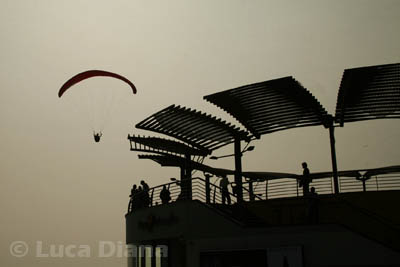 Around sunset time we headed back to our hostel in Miraflores where Pedro, one of the owners made us a welcoming Pisco Sour, the local concoction made with Pisco, a peruvian liquor, egg white and lime. Delicious. The perfect way to end a perfect day. 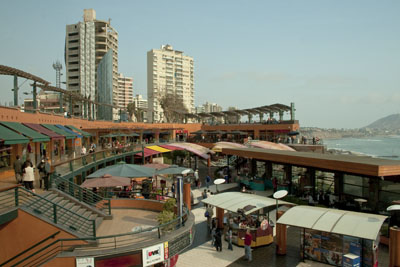