There’s something about waking up in a foreign country. Even early mornings always start with a smell of excitement at the possible adventures that will present themselves to us. Waking up in Japan was no different. The rain was coming down slowly but rather than being bothersome it added to the atmos 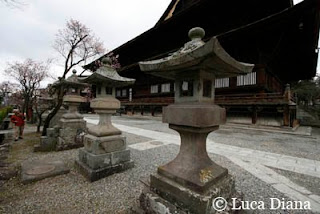 phere. Before leaving for this trip I had planned a series of shots that I intended to execute and some of them were based on neon lights reflecting off pools of water on the streets. The weather was playing in my favor.

Lindsey and I happily walked around Shinjuku for most of the day and in the evening even ventured in a theater to watch part of a Kabuki play. Kabuki is a highly stylized Japanese dance-drama type of play, we had to let our imagination free here as it was too complex to understand and my rudimentary notion of the Japanese language could not come to the rescue. So, instead, we made up our own story and pretended that the actors where saying things that, most likely, were the opposite of what they were actually saying, turning the drama into a comedy. 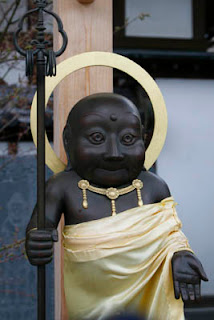 Since my arrival in Japan I took the decision to use the little Japanese I know and try to get better at it. I have always been good at languages and I enjoy learning new ones and communicate with local people in their language. This was going to take a considerable effort. I already noticed that when I’d address Japanese people in their language they’d reply with an avalanche of words that would have scared even the most seasoned member of the American Avalanche Association. Japanese people love to talk to strangers, that much is clear; my hope for an easy and concise answer was often smashed by a lengthy answer full of details that I could sometimes grasp, some other times pretend to grasp, but always ending with a polite bow and big smile on both parties.
On our third day in Japan we took the shinkansen for Nagano, famous for the 1998 Winter Olympics. Japanese trains are famous worldwide not just for their speed but also for their timeliness; in fact our train departed Tokyo perfectly on time and arrived perfectly on time. In Japan a train is considered “late” if it departs over 3 minutes from the scheduled time. In many countries a train is not considered late if it departs at all.
Nagano is located in the central part of the Japan Alps, therefore surrounded by mountains. With over a million people it is certainly not a small town, and yet one can feel the difference with a city like Tokyo. It has the mood of a mountain town, a slightly overgrown mountain town perhaps, but fascinating nonetheless. With peaks towering in front of us and valleys behind, the name Alps for this mountain chain seems quite appropriate.
Once left our backpacks in the station lockers (lockers are available at all stations. I applaud a country that doesn’t get intimidated by terrorism) we strolled up one of the main roads away from the center with just the essentials (our cameras) toward the temples area. The walk of about two kilometers took us across the city through building that grew steadily smaller as we moved away from the station and a cool breeze that filled our lungs with mountain air. The temples we visited were truly impressive: the wood hand worked with incisions of an indescribable care and decorations made in the minutest details. I took photos of every corner and niche I could find, outside as well as inside (with the due respect to the local deities)
It wasn’t before late that our stomachs were growling and we looked for a small restaurant recommended by a nice lady at the information office back at the station. It only took us a few minutes to find it. When the lady said 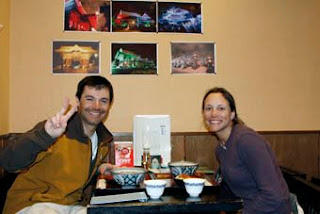 it was small she really meant it, it had a total of six tables. The price of the plates was good for such a popular and historical place, being located just outside of the gardens of the main temple. With just around $10 / 6.50 Euros we ate several things including a generous bowl of soba with freshly made Udon noodles. The waitress did not speak English and the menu was Japanese only and I was proud of myself for making a real effort and communicate with her in her language and being able to understand most of the menu. After just three days I had noticed a serious improvement in my reading skills, at least as long as the text is written in katakana and hiragana. I admit I didn’t know much, but what I knew was enough to get me by. After lunch we stopped by the main temple again to listen to a monk playing the drum. The sound had a defined cadence and was repetitive and it fit perfectly the grey and windy day. On the way back to the station we stopped at a large bookstore to examine some books on local geography and see if by their photos we could find new great places to explore. We don’t like planning too much in advance as that tends to put us on a path that doesn’t allow for changes. When we plan day by day we remain open to unexpected itineraries, particularly after talking to the locals.
Once retrieved our luggage at the station we hopped on another shinkansen (we surely love our unlimited rail pass), this time heading to Matsumoto. With major disappointment our train left late: 3 seconds (I had my watch synchronized with the station’s clock). Needless to say we arrived perfectly on time and walked in the dark (just like in Europe all streets are well lit) toward the Ryokan that we booked in the morning. Ryokan are similar to an old style inn, usually run by a Japanese family and the service is exquisitely Japanese. This was our first Ryokan so we were excited at the idea of trying a type of hotel that caters mostly to Japanese clientele, and foreign tourists like us, who like to immerse themselves in the culture of the country they visit. In fact, when we called to book, the lady who answered (in English fortunately) asked us if Japanese accommodation was ok with us.
After a not too long walk, during which somebody came out of their house to help us find our way, we arrived at the entrance to Matsumoto Castle and our Ryokan just outside of it. At $30/night it was quite a bargain. At the small reception sat an old lady with an old grandma smile; one of those people you want to hug the first time you see them. For some reason unbeknownst to us she decided that we understood Japanese perfectly and started giving us all sort of information. Saying that we were 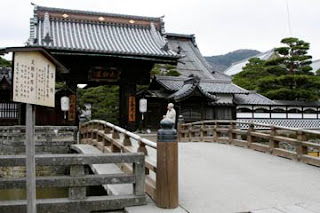 overwhelmed was quite an understatement but at the same time we were highly amused.
Fortunately after a while, a period short enough during which she could have recited the first two chapter of “Hamlet,” she called the lady with whom I spoke on the phone (her daughter) who helped us to our accommodation. As we enter we were pleasantly surprised: the room wasn’t huge, but much bigger than we expected and cozy. Two tatami mats sat rolled up on the floor against one wall on top of a straw mat; hanging on two hooks on the wall we found a set of night kimonos. An old TV with VCR as well as low table with a tea set on it decorated the room, which had its own shower and (tiny) bath tub. Simple old curtains ornate the window and a few decorative panels hang from the walls. In the bathroom we even found toothbrushes, toothpaste and shaving razors. In our countries we don’t even find these amenities in hotels that cost you $200 a night.
Our Ryokan is located just outside of the castle, which is an international heritage monument. We went out looking for a place to eat and walking around small streets at night, moving away from the tourist area we came by a restaurant packed with locals. The menu was entirely in kanji so unintelligible to either one of us, but seeing a restaurant filled with local people is always a good sign so, after building up a little bit of courage, we walked in. The place was quite large, most tables were occupied and the air was heavy with the smoke of cigarettes. Japan, for all the great things it has going for itself, unfortunately it’s one of those country were a large percentage of the population smokes and smoking is allowed nearly everywhere. As a non smoker I feel bothered by the fumes, but I, and Lindsey as well, decided that we were in for the cultural aspect of it. The waitress brought us in the back room and we sat on the mats with crossed legs at our low table imitating everyone else. Had it not been for my Mediterranean complexion and Lindsey’s bright green eyes nobody could have ever guessed that we were not locals. To our surprise the waitress gave us a sheet with an approximate translation of the menu in English, but being great Japanese food lovers we decided to go with our original plan, which was ordering pretty much everything in the menu. We shared some Okonomiyaki (a type of omelet, one of our favorite dishes, the mountains version here being slightly different than what I was accustomed to. I introduced Lindsey to it a month before our trip when I invited my friend Sugi over to my place and together we cooked Japanese dinner), a rice dish with tiny sardines (the smallest I had ever seen, almost too cute to eat) and a cold chicken-based dish, among other things. Dinner was delicious and, regardless of the smoke, the ambient was comfortable and jovial. We left the joint quite happy to have lived a full-immersion cultural experience rather than spending time in the usual touristic places. Off the beaten path: that’s our motto.

Once back at the inn, we put the tea service to good use brewing some green tea and set our alarm clock for an early wake up call. It was 11 pm. 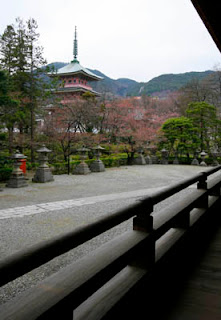 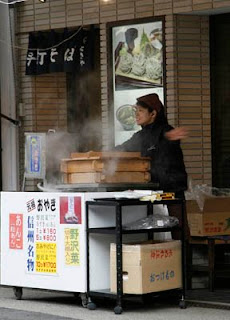