Japan’s ancient Capital is known worldwide for the variety of temples, gardens and cherry trees, which, unfortunately for us, had already lost their blossoms and had started to sprout leaves. One of the fascinating parts of our trip is that traveling across this country, which extends for hundreds of kilometers north to south, we can literally witness all the phases of the Spring season, from early to late conditions. 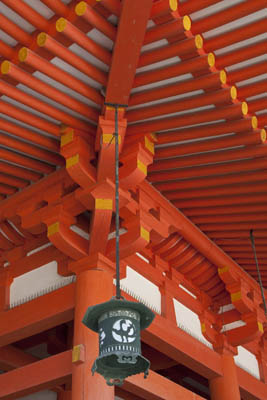 We immediately walked to the main temple, which at the time was being refurbished. The hangar built for the occasion wa so big it could comfortably hold an Airbus A380; the temple is just as impressive, one cannot stop to look at it in awe and feel so tiny next to it. A guide we met there, or rather who came to meet us because he felt like practicing some English, just like many Japanese we have met before, told us that the temple is around one thousand years old and is built entirely in wood without the use of a single nail. Really impressive. Needless to say, the best lenses for the job would be a wide angle and a macro. We walked for about 10 minutes to a hostel described in our Lonely Planet guide, which, since our trip to Peru, has become our favorite guide. The hostel was very pretty and modern looking, painted in nice bright and relaxing colors, but unfortunately full. We have a tendency not to book much, if anything, in advance. We travel with a very flexible schedule, listening to what locals or other fellow travelers have to say about a particular place and take it from there. Too often people travel thousands of miles to end up in your typical overpopulated tourist destinations, not us. Although there are occasions when we feel we need to see why a place is so popular, we leave plenty time to

explore countries off the usual tourist path. We try to understand why locals like certain places and absorb as much of their culture as we can. Sometimes, as in this case, there are drawbacks, like not finding a room in a recommended place, but not all is lost; with a positive attitude something good always comes out, and so it was. The girl at the reception called several other places for us but at a time like that nothing was available. This is Kyoto, and every person who visits Japan from another country visits Kyoto, without counting the thousands of tourists arrived from all parts of Japan itself. In less than an hour, though, we found a hostel near the Imperial Palace; we hopped on the subway and after walking around the neighborhood for a while and asking several times for direction (remember: Japan has no addresses) we arrived at the door of what seemed like an abandoned building. The inside was dark (and scary) but it was clean; our room was located in the back of the building at the top of a tight staircase, it was small, had no windows and was nearly pitch black. The good news was that nobody else was occupying it, and the other good news was that the hostel had bicycle rentals for the equivalent of $5 a day.

We could not have asked for better weather, the sun was warm and the sky deep blue without a cloud, for the first time since our arrival in Japan. We traded our preferred method of transportation (our feet) for two bikes and set out to explore this beautiful and intriguing city. People use bicycles a lot in Japan, including the major cities, but there are no bike paths so bikers use the sidewalks (except on crossroads, where there are bike paths used to cross the intersection). The typical Japanese courtesy behavior applies: everyone else has the right of way.
The further we moved away from the central area and the main train station and the more we felt like we were entering an immense garden, it’s quite easy to understand why this city is nicknamed the “Garden City.” With our bikes we pedaled along the bank of one of the rivers that cut the city in different areas enjoying this magnificent day to the fullest, until we found our way to the municipal gardens. We spent hours taking macro and close-up photos of tulips exploding in a myriad of colors and 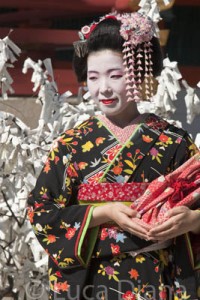 other beautiful flowers. The garden, which looked more and more like a canvas, was painted with small ponds and creeks, and also had a sizeable collection of bonsai. Crossing a wooded area we were surprised to find ourselves surrounded by large cherry trees in blossom and a very peaceful view: an older lady, sitting against a cherry tree, was drawing the pink scenery on a large pad. I snapped some photos of what would become one of my fondest memories of this trip.
Once back on the saddle of our bikes we slowly rolled once again along the river toward the Gion area, while enjoying a spectacular sunset. Gion is one of the most popular areas, if not the most popular, of Kyoto. It’s here that it is still possible to catch a glimpse of a real Geisha or a Maiko (the apprentice) and when we arrived the place was bustling with activity while an incessant flow of people moved in all directions, as attracted by the many lights. The street which cuts this quarter in half, with its cherry trees and river dancing on the side, is often referred to as the most beautiful street in all of Asia and it’s hard not to agree; regardless of the never-ending movement it gave us a sense of calm. 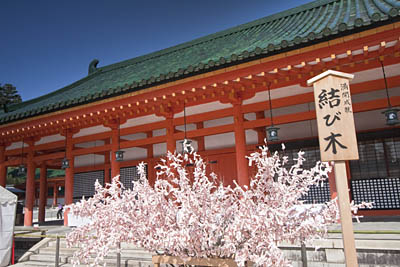 The neon lights of the shops combined with the light from the lanterns hanging outside of restaurants, and the street was dense with the odors of a myriads of foods prepared in the many restaurants of the area. We ventured in a darker and less populated street, looking for something more original and walked in front of a quaint restaurant with a large water tank by the entrance in which swam squid and other fish.

After peaking inside we knew we had found what we were looking for: four chefs were busy preparing food on a show-kitchen style counter, and the place was full with local people, no foreign tourists in sight. The waiter sat us at the counter where we quickly found ourselves absorbed in watching the cooks prepare their dishes with an elegant speed. After looking at the menu we quickly decided we wanted to try everything on it, and so we did; that was easily the best sashimi I ever had, and portions were very generous. Other than sashimi and sushi in all flavors we had several fish soups and dishes prepared with octopus, squid and shrimps. 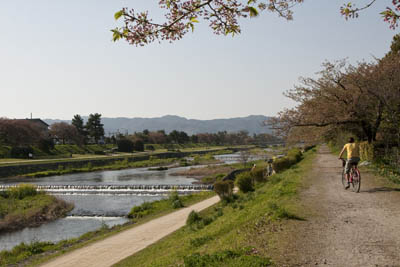 This was by far the most expensive meal we had in Japan; the two of us spent, including Sake, $61/€39. The same meal back home in Jackson would have easily been around $200.
We rolled out of the restaurant and spent an hour walking around trying to digest our lucullian meal before we jumped on our bikes and headed toward our scary hostel. I was in bed by 10pm, a record in this trip of late nights and sunrise awakenings.