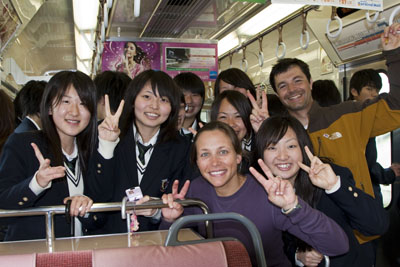 It was nice, for a change, not having to wake up at six in the morning. Chakie picked us up at 9:15 and that gave us plenty of time to be ready for her. Together we went to the train station where we joined with her friend Tomoka (whom I had met in Honolulu about nine years before). Tomoka doesn’t speak much English so our conversation was a mixture of English, Japanese criss-crossed by some translation of Chakie. Shortly after we took the train for Koya-san (Mount Koya), the center of Shingon Buddhism, a mountain town about an hour and a half from Osaka famous for its sanctuaries and cemetery (declared World Heritage by UNESCO). 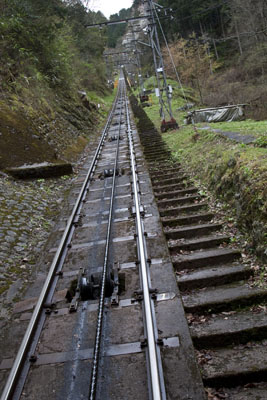 The day was quite gloomy, with dark skies ad a hint of rain; we all hoped the weather wasn’t going to ruin our excursion. The train trip itself was particularly entertaining, especially when a group of about a dozen schoolgirls on a station’s platform, seeing us on the approaching train, pointed fingers toward us and laughed maniacally. I am sure much of the commotion was caused by Lindsey’s deep green eyes, and probably not being used to see many foreigners on that remote train line. When the doors opened the girls flooded the wagon running toward us and asked to take photos with them; from entertained we suddenly became entertainment. We conversed a bit, with much stupor on their part for hearing me speaking some Japanese; Chakie filled in with the story of our trip. They all listened with the utmost interest. 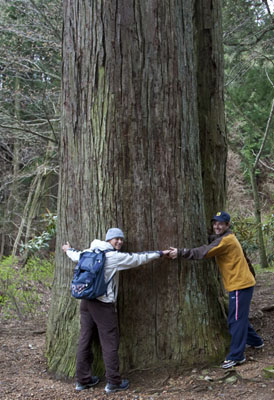 Once arrived at our station, the last one on the line, we disembarked to hop on a cable car similar to the one on Hong Kong’s Victoria Peak, which minutes later climbed the steep side of the mountain offering a breathtaking view of mountains and soon, the valley below partly hidden in the clouds. The journey was not yet over, and once at the top we had to catch a fifteen minutes bus ride to our destination across a thick forest of conifers. The bus dropped us in town, not far from a temple of majestic dimensions which serves as a gateway to the place. The temple was surrounded by immense centennial trees with a trunk so wide it would take four of us to embrace it. The stature of these trees was that of a tall tower and we felt minuscule standing next to them. We walked the road that goes from this sanctuary to the town and stopped to view other temples, until we arrived to the entrance of the cemetery. I wasn’t sure what to expect, I had seen other burial grounds in Japan, but Chakie had insisted that this needed to be seen. What makes this place special is that it is old, really old, ancient, and offers a vision both impressive and fascinating. 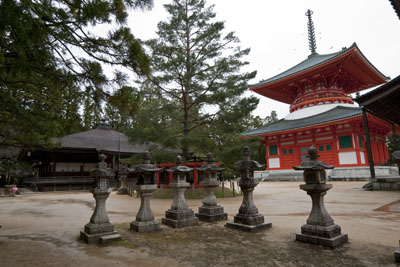 Rain started to come down in the afternoon, it wasn’t heavy but more than a drizzle, and constant; fortunately we had umbrellas as all hotels in Japan offer umbrellas for free (and all shops and restaurant have specifically designed umbrella sleeves with dispensers for not dripping indoors). The rain didn’t ruin our visit, quite the opposite, it created an atmosphere of mystery adding to the magic of the place. Being in a centennial forest (trees in Koya-san are 600 years old, we were told) with 500 years old tombstones and torii covered by a thick moss where everything is colored in a deep green was incredibly fascinating, it’s almost as if one becomes part of the scenery. The oldest part of the cemetery held an incredible beauty, just walking through it I could feel a sense of peace. A thin layer of fog permeated the wooded graveyard and I thought of ghosts. It was as if some spirits were hovering around me, but not to frighten me, rather to guide me. I never had that feeling anywhere else. We spent two hours wandering around the place, taking photos in the rain, contemplating the stones, lanterns, altars and torii. With more time in our hands it would have been a great experience spending the night here as Koyasan is one of the best places to spend “a night at the temple.” There are about fifty temples functioning as shukubo, temples where tourists are welcome to stay overnight, eat shojin ryori (the vegetarian meals of the monks) and take part in the morning prayers. 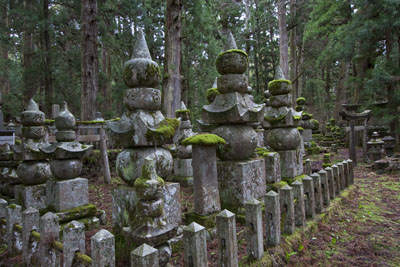 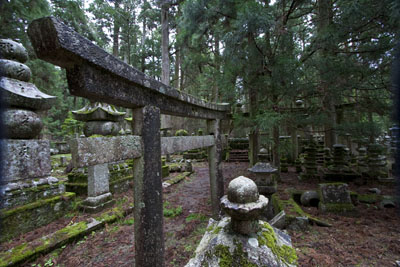 flavorful soba and udon home made meal before catching another bus to the cable car and make our way back to Osaka. In the city Chakie took us to some area we had not yet seen, and walked a few more miles under a light rain.

Dinner was in a semi-elegant place, on the second floor of a building with a view on the street, populated with a young crowd, where to have Okonomiyaki. Knowing my love for this dish, my friend picked one of the best restaurant in the area specialized in this dish where, here, was prepared in all three styles: Hiroshima style, Honshu style and Osaka style. The food was prepared in a exhibition kitchen, like the one in Kyoto, then brought to the table in the middle of which was a French plate to keep it hot. We had hot sake with the meal since it marries perfectly with sea food and felt like kings.