Departure was once again perfectly on time with destination: Nakatsugawa, a small mountain town. The ride, which lasted one hour and 20 minutes from Matsumoto, took us through valleys, rivers and high mountains. Our train silently devoured the tracks and it felt like being in the Italian Alps: breathtaking views of the surrounding mountains, some of which still covered in snow, lush forests, bridges and valleys crisscrossed by rivers and streams. Lulled by the movement of the train Lindsey dozed off on her seat and missed some of the bes 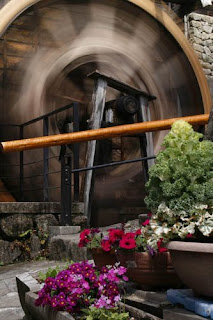 t views we faced on our railroad journey. The ticket taker did his round and, as customarily, before leaving the car turned around toward the passenger and bowed, I involuntarily compared him to our ticket takers who will seldom even say “hello” or “thank you.”
Our stay in Nakatsugawa was quite shot, enough to hop on a local bus toward the small mountain town of Magome on a ride that lasted about 30 minutes. Magome is one of those historical post towns that most foreign tourists wrongly dismiss but are popular with local tourists. It’s that kind of place that could be used to represent your typical country town in a Japanese postcard: The main road leading up on a somewhat steep hill cuts the town in two with a stream on one side and blooming cherry trees on the opposite. Small shops and restaurants open up on both sides offering local products and specialties from the area. At the bottom of the hill a watermill spun feverishly outside of a temple from which a smell of incense and smoke came out.
The air was surprisingly warmer than Matsumoto, regardless of the altitude gain and we stripped off of our heavier clothes to wear shorts and t-shirt. The town was lively with Japanese visitors and the many stores were busy offering samples of their products. This made Lindsey feel like a kid in a candy store as she had made a habit to sample everything that was available and often made a full lunch out of it. People seemed genuinely happy to feed us with their products, which, in this region are centered on honey and chestnuts. Arrived at the visitor center we dropped our backpacks there, taking advantage of a delivery service which transports the luggage to the nearby town of Sumago, leaving hike 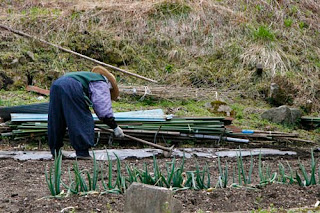 rs free of unnecessary weight. The over the mountains 5 miles / 8Km long hike was by no means what our seasoned Jackson Hole legs would consider a strenuous hike. Camera in hand we started the uphill trail and soon found ourselves out of town. Up and down on several mountains we crossed cultivated fields, waterfalls, streams and woods and often stopped to scratch an itch on our shutter fingers. Several times we were crossed by large groups of older people going the opposite directions and taking the easier, paved road who, every time we met, exploded in a choir of “konnichi-wa”. We replied we just as much enthusiasm. Even today, well over a year after our adventure in Japan, when hiking and crossing somebody, Lindsey and I look at each other whispering “konnichi-wa.”
Crossing the Japanese countryside was part of my childhood dreams about Japan and I was grateful that I grabbed the chance and made it happen.
In the mid-afternoon we finally arrived in Sumago, similar in style to Magome but smaller and somewhat tighter in construction. All buildings are made of a dark wood, probably cherry and reminiscent of the age of the samurai. I expected to be jumped by a few ninjas any time. It did look exactly like the towns from the Japanese animation of my youth: Ken the warrior, Sasuke the samurai and Ninja Kamui. We were a bit overwhelmed by it all: the passing of people, the view of the mountains, the smell of wood mixed to the one of soup coming out of the many soba shops on the street and the variety of colors so we sat down on a bench and took it all in, as a light drizzle fell on us covering the place of a gray veil. 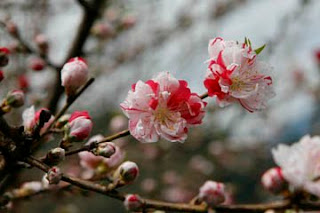 Having picked up our backpacks from the tourist office we hopped on a bus to the near town of Nagiso, a mere 10 minutes away, were we caught a train to Nagoya, the fourth biggest city in Japan. Nagoya welcomed us with torrential rain, a real deluge, of which I will not see the like until a year later in Scotland.
Ninjas and dragons don’t scare us, and neither does the rain. After exploring the maze of shops in the basement of the station, we ventured in the city. We noticed immediately how flourishing it was with its big brand name shops everywhere, from chocolatiers to high fashion. It seemed for a moment to be back in Tokyo with its large roads and neon lights, but moving away from the station was enough to discover another city within the city, one that felt much smaller and less overwhelming. It felt as if we arrived in a different place than the city where we were just a few minutes before. Fifteen minutes later we found our hostel, with a name just as long and unpronounceable as there ever was, and by far the biggest hostel we ever saw: 8 floors and 2 wings. The lady at the reception was of an exquisite kindness, I won’t remember her name, but I remember those people who make me feel at home. We asked and were given a Japanese style room, with tatami and tea service as we had in Matsumoto’s Ryokan. Upstairs we had common showers and even an Onsen. We decided to spend two nights here and use Nagoya as hub for our next two days so that we don’t have to carry our heavy backpacks with us. Our next visit is to Takayama where we will have a chance to see an authentic Spring Festival, all hotels there are full because of it.
Curry around here is quite popular and cheap therefore curry shops are to be found everywhere. That was our dinner.