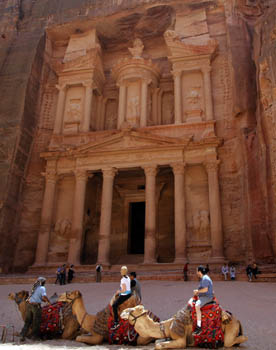 My legs were aching as I climbed up the steep path leading to the Sacrifice Place, high above Petra. The morning had started early and being one of the very first people in I enjoyed the ancient city nearly alone. The tourists would flock a few hours later, but for now it was me, my new hiking friend from England (a young and active girl I had just met in the Siq), a few camels, a herd of goats and just a handful of local herders and trinket sellers. After poking our heads inside a few tombs, climbing a tortuous path through narrow passages and stopping at the edge of a cliff where we could take a photo with our feet dangling over nothing for a few hundred meters down we arrived to the summit. I took a deep breath of the fresh morning air and inhaled the dry beauty of the harsh landscape. High on the hills, with an horizon that seemed to be so far away, surrounded by desert and red rocks we sat down on the edge of another cliff and let our eyes and skin absorb this rugged beauty. Down below we could see goats and the occasional camel roaming around, locals starting to set up their selling tents and the sun growing brighter and harsher by the minute. I wasn’t feeling in the mood for vast landscape photography, somehow I couldn’t find that exciting framing point for a good wide-angle. I could see the beauty with my eyes but I could not see it in the viewfinder. I supposed this is one type of beauty that has to be lived in person. I limited myself to taking a few wide unexciting shots and concentrated more on details like the stripes on the rocks, which I thought were beautiful. The lines and gentle curves and swirls of red to white tones made the perfect subject for texture photography and my excitement grew the more photos I took. I loved the warm tones of the rock but in my mind I could also picture this in B&W, and that’s a bonus when a photo works well in color as well as monochrome.
As we took a different trail, the way down was just as long as the way up, if not longer. A young guy crossed our path with his heard and looking at my hiking companion, or more like a open mouth stare (she is beautiful, indeed, and she must look extremely exotic to the Middle-Easterners), first told me I was a lucky guy (the ever present assumption that a man and a woman traveling together must be married) and then asked me how many camels I would trade her for. Images of Lawrence of Arabia danced in my mind, seeing myself going back home with two brand new camels, but I politely declined the offer and laughed with my new friend when I told her what had just happened. We both wondered if he meant it or if he was mocking us. Either way, it was a fun moment. Minutes later we arrived to the main road, which was like a large avenue dotted with marble columns and bid our farewells. 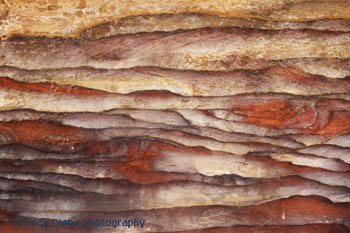 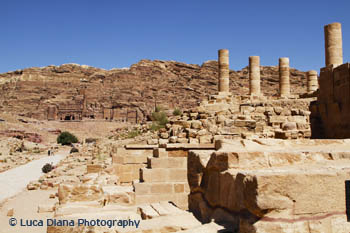 There was so much to see, but I didn’t rush. The point of being here was not seeing as much as possible, the many long and winding canyons which form Petra, with their myriads of  tombs and houses; the scenic plateaus and sheer cliffs cannot be seen in two days, and that’s all the time I had. Instead, I decided to see the highlights of the place and just enjoy being there while stopping often to take what turned out to be several hundred photos.
A boy offered to take me up to the Monastery on his mule, the usual selling point being that the trail is steep and long. “Too far, sir, you’ll  have to walk two hours” he said. I had to decline the offer several time, a mule ride sounded like fun but I came here to hike, and I’m a fast hiker, and if long hikes in the Tetons don’t scare me, I don’t see why those in Petra should. So I started the climb and one quick step in front of another I made it to the top, exactly 29 minutes later. The view of the majestic Monastery carved into the stone opened up in front of me just as imposing as the Treasury. I spend a bit of time taking photos from many angles then continue my hike a little further toward the cliff at the end of the mountain. Here, surrounded by sharp rocks, with my feet dangling a mile above the ground I looked in the distance, toward Israel. Nobody was around and I savored the hazy view with the silence only broken by a gentle wind. I sat there for a while, doing absolutely nothing but look toward the horizon and it felt good to be once again with nature, on top of the world, like when I was in Machu Picchu 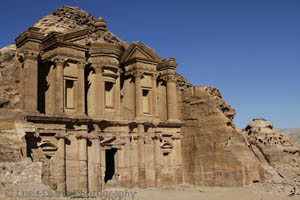 I ran down the path just for the fun of it regardless of the hot Middle Eastern sun and it felt good and I felt free. My friend and the mule were at the bottom of the path and we exchanged a few pleasantries before I hiked back toward the Treasury and the half mile long siq.
Leaving Petra behind wasn’t easy and once again I left a place with the promise that I would be back. With my head against the window of the bus that would take me back to Amman I closed my eyes and saw myself on the cliff by the Monastery. My own top of the world.
I didn’t sleep but the hours on the bus went by quickly as I stared at the desert. Arriving in Amman with the dark I decided I didn’t want to waste my last night inside so I ventured through the market stalls of the old city and sampled local food. $4 got me a nice dish with lamb in a eatery that rarely sees western tourists and my only regret was not being able to communicate with the locals to at least let them know how much I enjoyed their country.
I woke up early and took a taxi to the bus station to yet another bus, this time to King Hussein bridge and the border with Israel. A few years ago I had the chance and honor to meet King Abdullah II and he stroke me for his casual and pleasant manners. It’s easy to see why he’s loved so much by his people.
The bus slowed down and Israel’s flag came to view… but that’s another story.