It’s been over five years since my adventures in Peru but the events that took place there, especially the night of October 29th, are burned in my memory and will be for a long time. The following is  recap of what happened after Huacachina, after we nearly lost our lives in a bus crash, which incidentally was when I stopped writing my travel diary for that trip.

The morning was filled with excitement as we got up from our small beds in the hostal found the night before. Nazca was the fulfilling of another dream for me. Lindsey only knew what I told her about this place, but to me this was the place where magic and extraterrestrials came to life. I was about 10 years old when our mailman delivered a book that my mother had bought me: The Last Mysteries of Earth. It was huge, had a shiny blue hard cover and I read all of it front to back, several times in fact. Back then I promised myself that when I grew up I would go see those places. Years later I forgot about the book, but when it finally came to mind I realized that unconsciously a good part of my life had been driven by it. Still today I’m trying to keep the promise I made to myself. 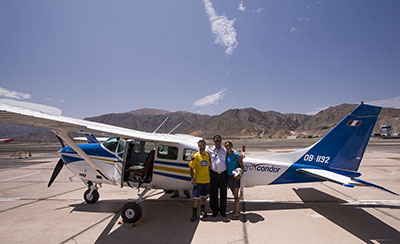 The book had a chapter about the strange lines of Nazca, an intricate network of strategically placed rocks that only from high up in the sky reveal the most amazing figures like a spider, a monkey, a condor, and even an image known as “the astronaut.” The book told the story of Maria Reiche (1903–1998), a German mathematician and archaeologist who spent all her life in Nazca studying the lines trying to understand their secrets. My hope was to meet her one day but unfortunately I arrived in Nazca 10 years too late. As of today the mystery of the desert of Nazca, a region that has not seen rainfall in over a thousand years, is still unsolved. Theories abound but none of them is conclusive, including the mystery around who built the lines but most importantly: how did they do that. The lines are so perfect that scientists are baffled at how that was accomplished without an aerial view.
We left out lodging and called a taxi to take us to the small regional airport, the Maria Reiche Neuman Airport several kilometers out of town. I had a grin from one ear to the other, kept looking around like a child in a candy store and counted the minutes that separated me from seeing the images in the book with my own eyes. The taxi dropped us off by the General Aviation hangars and we perused all the trinkets in the small gift shop for a while waiting to be called. Not long had passed that a friendly voice called me by name, it was our pilot dressed in full uniform who introduced himself and told me: “I heard you’re a pilot, you can sit next to me.” With us there were two middle aged American ladies and a man who came here with the same curiosity about the lines. I climbed on the co-pilot seat of our six seater Cessna (a 206 I seem to recall) and felt right at home. Lindsey sat in the back. To my dismay the controls had been removed from my side, but I came here to see the lines and take photographs so I wasn’t going to let that bother me.

In a short time we were up in the air heading toward the desert. The nose of the plane pointing toward a pretty big hill, when our pilot took the aircraft to the opposite side and banked it to about 45 degrees revealing a huge figure covering the entire side of the hill top to bottom which made me stare with an open jaw and a whispered “wow”: The astronaut came into view.

We circled a few times so that everyone on each side could see it well. Leaving the spaceman behind we flew a pattern that took us to the spider, the condor, the hummingbird, the monkey, the landing strip and many others, one more beautiful and fascinating than the previous. The same questions that Maria Reiche and many other archaeologists asked themselves came to me: who built this lines? Why? How did they reach this kind of perfection without seeing from above? Why these particular figures and geometrical shapes? What did they know that we don’t?

Our pilot said it was time to head back and told me I could take the plane home. I reached over to the controls on his side and happily took the Cessna back to home base. After a smooth landing we descended from the aircraft where I found out that Lindsey had not enjoyed the tour as much as I did since she got motion sickness soon after take off.

We crossed the street to a nice looking resort and sat by the pool on this hot day sipping ice tea. The gardens were in full bloom and several beautiful birds sang their songs as they flew from a tree to another. We asked a young lady at the reception to call a taxi to take us back to town and she asked if she could tell a trusted friend to pick us up. We agreed on $9 and waited for the driver to show up. He arrived about 20 minutes later in a tiny car that could barely hold the 3 of us (and none of us is a giant) and spoke no English, a sticker across the entire windshield bore the name of his wife. He was a young man in his early twenties and seemed very nice. He asked us if we had seen anything else in Nazca besides the lines. We had not and he offered to take us to the Puquios (the aqueducts), which have been estimated to date back to around 500 AD and built by a Pre-Columbian Nazcan civilization. Amazingly these Puquios are still fully functioning regardless of several major earthquakes and carry fresh water from the mountains to the valley. Our driver and newly-found guide told us that the ticket to the Puquios was $4 but at the gate we could buy a $10 pass which included admission to several other areas of interest as well as the museum in town and offered to take us to these places. With nothing else planned for the rest of the day we purchased the pass and were driven around the valley across aqueducts and more lines by our new friend who turned out to be very knowledgeable about the history of his region.

Several hours later he dropped us off at the museum in town telling us how to get back to our hotel, which was a short walk away. He expected nothing more than the previously agreed $9 but we felt that would have been dishonest and ungrateful to a guy who showed so much enthusiasm and willingness to go out of his way to please us so we gave him a generous tip and left him speechless.

We found a nice little restaurant for our late lunch and for $5 each we had the best ceviche to date and a large tasteful plate of rice and seafood with mineral water.

In the evening we took a Cruz del Sur bus to our next destination: Arequipa. The bus was a large comfortable double decker: first class on the lower deck with seats reclining to flat bed position and Economy class on the top deck with seats reclining to a comfortable almost flat position. A brochure onboard showed that the bus was equipped with a GPS tracking system which would alert the central office shall the bus stop for any unscheduled reason. Ten hours and we would be in Arequipa.

Two and a half hour into the trip everyone was asleep while, sitting toward the back of the bus, I happily typed on my laptop logging the events that had taken place the day before. Lindsey was sitting in the front row. I felt we were going really fast in a moonless pitch black night when we came to a sudden stop sending my laptop flying in the air. I immediately stood up and reached to it within the limit of my seatbelt and was able to grab it before it flew further away. Everyone woke up screaming, not knowing what had happened as the bus flipped on its side still sliding forward and finally stopping at a 45 degree angle. People everywhere were trying to stand up and smash the windows to get out, screaming incoherently. I remember standing on my seat and yelling in Spanish to sit down and not to panic. I had no idea where we were on our journey, but I knew at some point our road went by some cliffs hundreds of feet over the ocean and I was afraid we might be there. I didn’t want anyone rocking the bus. As people calmed down a bit I moved to the front of the bus to find, with much relief, Lindsey unarmed and the large window in front of her completely shattered. A few of us were able to open the door finding out we had crashed on the side of a sand dune.

People starting flocking outside as cars raced by us carelessly on the road regardless of the debris of the crash in the middle of it. We found out we had hit at high speed a large truck carrying metal scraps which was traveling in the same direction as us but at much slower speed and with no lights. The front of our bus was completely destroyed and seeing that I feared for the life of our driver. Miraculously neither ne, nor anyone else, had suffered any major injuries. A lady visiting from Italy had banged her knee and felt some pain but she would survive. An older Peruvian lady felt like she was going to have a heart attack, and a French guy cut a finger in his panicked attempt to break the window. Lindsey later would find a stone stuck in her bra. About an hour later, maybe less, the clock seemed to have stopped and ticking faster all at the same time, a police car approached. A single police officer, a large middle age man, parked halfway on the road and shut off his lights. I asked him if it was safe to have a car parked on the road in darkness and went back in and turned on his lights. Meanwhile cars and trucks kept zooming by us, uncaring.

While everyone was trying to make heads and tails of what had happened, Lindsey and I started a conversation with two guys from Sweden and a couple from France. As fate likes to play tricks, it turned out that one of the Swedish guy’s godfather was a friend of mine. Two and a half hours after the accident a Cruz del Sur bus arrived and picked us all up, our trip was to continue. I looked at the stars and wished that no other bus crash was involved in our upcoming adventures.

If you’ve missed the previous days, my dear reader, click on the tab “Travel Adventures” and find “Peru.”