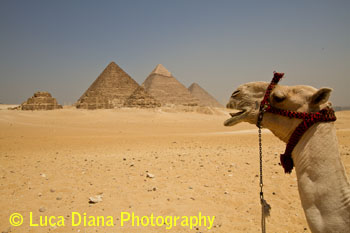 It was bound to happen. I grew up a mere two hours flight away but I had never been there. I looked left from the height of my camel saddle and there they were, all three of them, the majestic pyramids of Khufu (Cheops), Khafre and Menkaure. All history books I’ve studied in school talked about their size, of what a great feat of architecture they are, and yet, being in front of them still caught me a bit off guard. This was pure splendor of architectural perfection.
Once again I was traveling with newfound friends, quite an assorted background: United States, Czech Republic and India. Our guide, Ibrahim, picked us up in Alexandria and for the three hour drive to Cairo he shared with us his historical, geographical and political knowledge of ancient and modern Egypt until the first road sign marked “Giza Pyramids” presented itself high above the highway. We peeked through the windows of our transport to catch a glimpse of them and when we finally saw one in the distance, high above the road, our torpor was replaced by excitement. We were not out of the van one minute that quick fingers had already started snapping away at the humongous construct and after the classic, or rather cliché, group photo of us posing as ancient Egyptians on a wall we proceeded to the far end of the pyramids toward the desert from where we could get an unobstructed view. Ibrahim introduced us to our camel guides, a young bunch excited at the prospect of making some money in this disastrous tourism downfall  but also interested in us having a good time. And so here I was, a few hundred meters away from the pyramids, in the heat of the Sahara desert, standing up on a camel to bring home a memorable photo of myself and the pyramids to my family and friends. This being my second camel ride in a week it was still quite fun and exciting if not uncomfortable. Unfortunately on the way back my 7D decided to abandon me for the rest of my trip and nothing would bring it back to life. I will not have a good camera until I return to the Unites States, meaning that from that point on all photos would be taken with my cell phone. I would not give in to negativity and dismay though, and used that as an excuse to return to Egypt sooner rather than later. 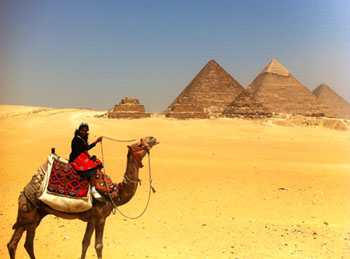 The docile animals dropped us beside the pyramid of Khafre where our guide picked us up and together we walked toward the smaller pyramids near the Cheops one and inside one. The narrow slanted and slippery passage took us a hundred feet or so underground, not a place for the claustrophobic. There was no decorations on the walls, and as the outside light receded further and further away the sight of a chamber on the left side of the wall, at the bottom of the passage slowly came to view. No living mummies here waiting for us in the dark recess of the chamber and we actually left the place without receiving any curse from an ancient Pharaoh (that we know of). The chamber was small and empty and all was in there was just some massive stone blocks, but we sat on one of them and dreamt of a day when it was filled with beautiful artifacts and riches beyond anyone’s dreams.

The afternoon was filled with a quick visit to the papyrus museum and shop where we were shown how papyrus is made and how to recognize an original sheet from a fake (fakes are made of banana leaves); lunch on a beautiful restaurant on the bank of the Nile river after a short boat ride and also a tour of the bazaar in Cairo where shops and tents selling ordinary clothes and trinkets alternated with show of true artisanship displaying handmade and hand decorated lamps and plates. It was a wonderful experience that we all enjoyed. In the evening we returned to the pyramids for the Light and Sound show. Without the ability to take good quality photos, after taking a few with my phone I just sat back and enjoyed the show. 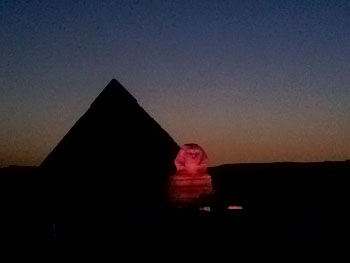 This was a trip that deserved taking a second body, unfortunately having sold my 5D Mark II an not having had a chance to get my hands on the Mark III I was left with only one body. I carried a variety of lenses with me: the ever present 24-105, the 10-22 and a 100mm macro with an extension tube, all Canon. I also brought a warm/cool circular polarizer but frankly I’m enjoying less and less the look of a polarized image as I find the change too aggressive. I also recommend bringing a light tripod.

If you’re visiting Egypt and need a reliable and experienced guide I strongly recommend our guide Ibrahim Mahdy (he also speaks Italian). He is knowledgeable in the history and culture of Egypt and will provide an excellent experience at reasonable prices.
His company is G Adventures.