My favorite time to write is while on public transportation, be it on an airplane or a train. Here I am, sitting on a plane from Detroit to Salt Lake City on my way home from a quick getaway to Seoul, South Korea. And a quick getaway it sure was. I left Montana on Tuesday morning and returning today, which is Friday. That gave me a full day in Seoul. Sure, that’s not much to see the city but the whole purpose of this trip was a chance to fly the upper cabin of the Delta Boeing 747 one more time before it retires at the end of the year (United will be retiring theirs as well soon). And I also had been to Seoul before (see my previous blog post: A Stroll in Seoul), so one could say this is a continuation of my previous trip as I focused on sights that were new to me. Seoul is a fascinating and vibrant city where people are quick to smile and a dollar goes  long way (it’s still only about $4 for a one way train ticket from Incheon airport to the city and a 2 liter bottle of water will cost you less than a dollar). I confess that I didn’t go out seeking photograph opportunity on this trip, I was just happy to be there. Well, it’s not that photographic opportunities do not abound, it’s more like the light was just not the best. A sunny day will give you strong light with harsh shadows and a sunny day is what I go (but who am I to complain), so perhaps once home, as I start cataloging these new photos, I will work on some black and whites as that gives more justice to harsh lighting conditions. 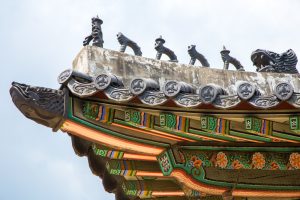 I like to walk and this trip was no different than many others where I consumed the bottom of my shoes. I arrived on Wednesday night after a 13 hours flight from Detroit (and 2 other flights before that) and after dropping my small backpack at the hostel I booked by Hongik University for a whopping $16/night (breakfast included), on a direct train line from the airport, I went to explore the neighborhood and find something to eat. I really like that area, Hongik University has a fun, multicultural, night life and it’s brim with cheap restaurants, coffee shops and beer houses. I will most likely stay there again.

The next morning I took the subway to Namdaemun Market. One could find all sort of things here, it reminded me of the Grand Bazaar in Istanbul. There’s an above ground section, that spans across a large area and multiple small alleys, as well an underground claustrophobic as well as rich of all sort of merchandise section. I truly enjoyed both as I walked around taking pictures and GoPro video while being greeted by the smiles of many merchants.
I wasn’t there to buy stuff (although there’s so much I would buy) but I love this city, and I think they could tell.

In one of the small alleys I found several restaurants displaying a variety of locals dishes and tantalizing smells. Letting a gracious lady lure me inside one of them I try a typical Korean dish which was still new to me:  Bibimbap (literally: Mixed rice. It’s served as a bowl of warm white rice topped with sautéed and seasoned vegetables chili pepper paste and soy sauce). I loved every bite, as it contained several flavors that perfectly married each other. I liked it so much that on my flight from Incheon to Detroit I had it again as it was one of the meal options.

Satisfied with my lunch choice I, once again, took the road to walk toward the City Hall. This is a gorgeous modern glass building that sits just across the Deoksugung temple area which I had visited on my previous trip (see past blog post: A Stroll in Seoul). I would recommend spending time in this area to anyone interested in travel and architectural photography. The harmony of the lines in those buildings just make for some great shots. Walking down this large avenue I arrived at my destination, the Gwanghwamun Gate and temple complex. I shared some of the sights with a young woman from Holland (originally from Syria) whose name is Arua, if memory serves me correctly. As we took each other’s pictures we talked a bit about world events. Of course we touched a bit on the topic of Syria, and she made me realize how hard it is for people who only have the Syrian passport to travel anywhere as most countries will not accept that passport for entry. It is sad that a whole people can be discriminated based on their nationality. I have not met a whole lot of Syrians but those I met where beautiful people with a quick smile, a sense of humor and a will to share what they have with other cultures. I hope they will find peace soon.

After another walk to the subway station I took a train to the National Museum of Korea. Those who are museum lovers will find thousands of artifacts to entertain them for the whole day; those who are not will still rejoice from the gorgeous setting and building, the many collections inside that are worth at least a quick browsing, and the fact that admission is free.

After this I went back to Hongik University area to relax and grab some dinner. The next morning I had a 6am alarm clock to get me to the airport in time for my 10am flight.

Seoul has so much more to offer, but I’m truly intrigued by the beautiful sights advertised in posters around the subway stations. With mountains, rivers, waterfalls and lakes, as well as gorgeous foliage colors, it seems that South Korea will be calling my name sooner rather than later.