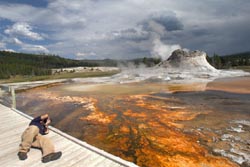 Luca was born on the Mediterranean island of Sardinia, Italy and started playing with cameras at the age of 6. His intense passion for photography has carried him to locales all over the world including Canada, France, Ireland, Italy, Hong Kong, United Kingdom, Japan, Peru, Brazil and across the United States.

As an artist, Luca keeps his eye open to all image possibilities, but he primarily focuses on landscapes, both natural and man-made (what he likes to call the Human Landscapes) but he also enjoys capturing the essence of snowsports as well as rodeos. His ceaseless quest to frame each place’s inherit beauty will continue on his upcoming voyages to Italy, France, Micronesia, Patagonia, Chile, and Easter Island.
Luca has also contributed his photos, as well as expository articles, to periodicals such as Disneyland Paris’ internal publications, Italian magazines, Ski magazines and more.

While Luca currently resides in Jackson Hole, Wyoming near the outskirts of the Grand Teton National Park and only a short drive from Yellowstone National Park, he can often be found on foot trekking on and off the beaten path, or on the ground contorting himself into a position to get that perfect shot.

Among other things Luca enjoys Snowboarding (he has been a certified instructor for 11 years), Kayaking, and SCUBA Diving.