My most recent trip was to a destination I had wanted to see all my life: the remote Easter Island (Rapa Nui). This island has captured the imagination of more than one photographer and it had been on my bucket list of must-see places for a very long time. Typically, because of its remoteness (and expense) this is not a trip that one does often, so I wanted to be ready to capture the beauty of the island without compromise. Rather than traveling with my most used lenses I decided this time I had to bring along my whole collection and two bodies: my full frame  Canon EOS 5D Mark III and my crop Canon EOS 7D. Having a second body is not strictly necessary, but I wanted to be ready in case anything happened to my main camera. I contacted my friends at Think Tank Photo who asked me to provide a list of the equipment I was taking along as well as a description of what type of travel I was planning to do (hiking, not checking any luggage with the airlines). After a few days they recommended and provided one of their bags: the Airport Accelerator V2.

The bag arrived in just 3 days in a well packed box. My first impression was of a sturdy well-designed bag, somewhat light and slightly large. It would definitely fit on the overhead bin of the plane, but a nice surprise would come later. A little side pocket on the top contains a steel wire with lock, a definite bonus for those who seek extra safety, handles on two sides (those who read my article “Get Your Gear Home Safely” on the Popular Photography May 2013 issue know I’m a big fan of handles, they extend the life of the bag greatly when checked with an airline) and straps that turn the carry-on bag into a backpack; these straps also have ever-useful “D” rings. The back is very well padded and seats well against my back as I hike. There are two zippered compartments for laptop, tablets, cables, etc. plus the main compartment for 2 camera bodies and a whole assortment of lenses. The main compartment has 3 zippered  pockets which I used for business card holder, postcards, extra memory cards in their original packaging, pens, markers and more. Other than the two cameras I brought along the following Canon lenses: EF 10-24mm L, EF 15mm L fisheye, 100mm L Macro, EF 100-400 L, EF 50mm and a Rokinon 14mm which I had just received but never tested. I also had a GoPro Hero 4 Black with an assortment of accessories, remote timer for the cameras, several filters, egg cooking timer (useful for time lapses with the GoPro), a lens/sensor cleaning kit, 4 batteries, charger, a lot more cables that I can count, 1 laptop and 2 tablets. The bag also contained a waterproof cover which fortunately I didn’t get to use. Everything fit comfortably inside it. Outside there’s also a pouch for a small tripod (which I used) and comes with two straps to hold the tripod in place on the top end.

By the time it was zipped up and locked (the main compartment and secondary can be locked with a separate lock; I always keep spare combination TSA approved locks around) its weight was about 35 lbs/16 Kg, definitely more than I wanted to carry on my shoulders but for this journey well worth the effort.

The first tests were at the airport: the full bag went through the TSA scanner without a  glitch. My first flight out of Jackson Hole, Wyoming was on a regional jet (those with a small overhead bin, because of which, larger carry-ons won’t fit and have to be “valet” checked to the door of the plane at destination). The big surprise here was that my Airport Accelerator actually fit (tripod removed) under the seat in front of me, and that made me a lot less anxious about the rest of the flights (3 flight to reach Santiago plus a fourth one 4 days later to reach Rapa Nui). 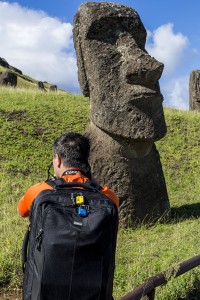 After Easter Island I flew to Sardinia, Italy which took another 5 flights, were the pack was brought on the plane as carry-on. In Sardinia I lightened up its weight and took it on a long steep hike through the hilly countryside. Regardless of the scorching sun, the Airport Accelerator felt very comfortable on my shoulders.

My back suffered a bit from the heavy weight of the backpack while on Easter Island, but as I said, I really overdid it, add to this that I’m 5’6″. The backpack is very comfortable and padded in all the right places and if anything it alleviated the pain. I don’t think I would carry a full pack on a long mountain hike (I should rent a yak for that), and it was not designed with that purpose in mind, but for trips with mixed transportation were there isn’t a lot of non-stop walking involved this backpack would be my first choice.