Without any doubt, in this trip filled with adventures and humor, to me the evening spent in Hiroshima was the most emotionally draining part of the journey, but let’s go in order…

After passing Osaka and Kobe the scenery changed from urban to gentle hills to urban again surrounded by tall hills and lots of green. I can never get tired of the Japanese landscape, it’s so photogenic. Arriving in Hiroshima the thing that jumped to my eyes the most was the large quantity of green spaces and the beautiful hilly background. We expected to see a regular city with tall buildings and not much else, and because of that we came with the intention of skipping the city almost entirely and head instead to the shrine island of Miyajima (also called Itsukushima). Later on we came to regret this decision as we realized that Hiroshima deserves some time to be seen and appreciated, but we made the most out of our time to see as much as we could of this city. What else can you do when you have to 15 days to visit a country that deserves a lifetime?

At the station we hopped on a local train which took us out of the city, to the harbor , where we paid for a ferry ride to Miyajima. The ride was only just over ten minutes long, and ferries ran every fifteen minutes. Although short, the ferry ride gave me a chance to photograph the Torii of the Itsukushima Shrine from the water, using the tall hills of the island for background. This is the first view of the world famous Torii one gets as they approach the land mass, and the scenery can change drastically as the tide retreats during the day. Out of the ferry we were given maps of the island with local attractions and hiking trails. I barely made it out of the gates when a deer snatched the map out of my hands and started chewing on it, to much tourists amusement. I tried to chase it to get my map back but all I could achieve was petting it on the head. There were many deer at the dock, all seeking attention and food. Supposedly wild deer, they are so used to tourists that they behave more like domestic cats, walking slowly among the crowd and rubbing themselves on people: an attraction of their own. Many of these had their antlers cut, so not to cause damage, and I noticed a sign which read: “Do not approach deer with antlers.” We just did what million other tourists before us have done and took many photos with these unlikely pets.

Once our excitement for the animals faded a bit we walked along the shoreline toward the town center and soon arrived in front of the Torii on the water. The tide was high and it seemed as if the sacred gate was floating. On the water we could also see many poles, used for the oyster fields, another reason for which Miyajima is famous. Carts and little shops roasting and selling these delicacies were scattered around the town, so we stopped at one and took place in line to savor the seafood; these were some of the biggest oysters I had yet to see. Grilled on an open flame I had to wait a few minutes before I could eat mine, but once I did, a delicious taste filled my mouth: best oysters ever.

We visited a 5-storey Pagoda, which we had seen from the boat, and later entered a park to a trail that serves as foot access to the tallest hill of the island. There is an aerial tram that serves one of the peaks but our favorite method of locomotion is walking, and a long and steep hike it was. We crossed a few people on the way up but not as many as we expected to see; the trail climbed under a forest and next to a stream that once in a while offered some low waterfalls. A sign said that monkeys lived in the forest but we didn’t see any, what we saw was more deer, totally oblivious of us. The hike took us to an elevation of 550 meters (about 1,800 feet) and we still couldn’t see below us because of the thick woods. We arrived at a small temple, and stopped to pay our respects to the flame 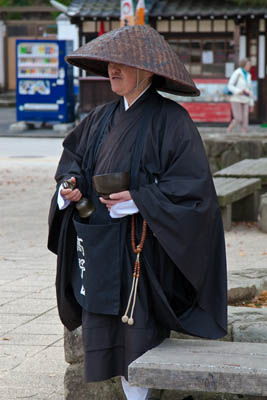 that, legend has it, has been burning for nearly 1000 years, kept alive by the monks. The smell of incense permeated the inside of the small dark wooded temple, making us forget the long climb and rejuvenating our spirit. Another short walk and we got to the summit, where a majestic view of the green beauty of Hiroshima Bay and the city presented itself in front of us. On the opposite side the enchantment of the Pacific Ocean and numerous islets, some inhabited some not, and more oyster poles, opened below us. All these islands, including ours, where entirely covered in a lush vegetation. It’s beautiful to see that not all places where humans have set their foot have lost their natural charm. The place presented us with more photographic opportunities and I shot a lot of memory card space using my super wide-angle. Our way down, different than the way we took to come up, wasn’t easy. If anything, it was made substantially more difficult by the effort of keeping a constant slow speed on a tortuous downhill steep path. After walking for about 9Km (5.5 miles) which felt like 20 we were once again in the village and immediately noticed how, during the hours we spent away, the tide had retreated. The big Torii wasn’t floating on the water anymore but was instead surrounded by land and many people walked to it, while many other searched the now dry seabed for mollusks filling their bags with the exquisite seafood.

Happy with the visit of this quite unique place, we waved our goodbyes from the sea to the island, the Pagoda, the Torii and the paper-eating deer.

The one thing we had to visit at all costs in Hiroshima was going to close in a few hours so we rushed to its location as fast as we could: the A-Bomb Museum. The museum was created with the willingness to spread a message of peace to the world, in the hope that what happened to Hiroshima and Nagasaki would never again be repeated. Passed a bridge we arrived at the ruins of a building now known as the “A-Bomb Dome.” When the bomb exploded above the city, on that August 6th 1945, the detonation happened on top of the dome and that’s the reason why this building was nearly spared as the

detonation irradiated away from this point. The city made strong efforts to preserve it for the future generations, as a witness of what happened, even if many wanted it demolished to remove the painful memory. Today, the ruins of what used to be a beautiful building have been declared world historical patrimony. The bomb, exploded at a height of 600 meters above the city, caused the death of about 200,000 people, many of which students, as the city was a university city during the war. The museum was just ahead, a nice looking modern building of concrete and glass. Upon entering  we rented some headphones for the English translation of the displays. The main room, right after the entrance hall, offered a history of Japan in the decades that preceded the war. The rest of the visit was dotted with objects, documents, and storytelling of the

events of that day and what followed. This was overwhelming for anyone who cares at the very least a bit about humanity. Even Lindsey became unusually quiet for the rest of the evening.

I was impressed and baffled on how the Japanese have remained objective in telling just the events without any feeling, I don’t think any other country could have managed. We slowly and quietly walked out of the museum and, except for a few comments at the moment, we never discussed it again. It’s as if the pain felt by this nation permeated our skin. I left thinking that the world would be a better place if all people of Earth visited this museum.

We walked some more under the evening lights of this beautiful city and treated ourselves to some nice Hiroshima-style Okonomiyaki before catching our train to Osaka which we rode without saying a word. We were exhausted.