Navigator of the Sea: the name, although inspiring, means little to anyone who hasn’t been on a cruise and meant little to me up to the moment I boarded this 1,120 foot long ship. My friend was on his sixth Royal Caribbean cruise, this was my first ever. My elevator arrived on deck 5, the Promenade deck and I couldn’t contain a “wow.” One thing is seeing a cruise ship promenade on photos, another to experience it with one’s own eyes. I can consider myself well traveled: two weeks ago I was in Tokyo, Guam and on my way to Palau, Micronesia. Next week I might  be in Hong Kong, Stockholm  or who knows where (I, unexpectedly, ended up in Paris), but I still looked around with a sense of wonder at this architectural prowess. Only four days later the Promenade has become almost like a home, still an amazing place, yet much more familiar. A little bit like Disneyland’s Main Street U.S.A. to the cast member (that’s how Disney calls its employees, a title I carried for five years) who has worked there for years. I’ll cross the Promenade waving to a new friend, stopping to engage in conversation with another one on my way to the gym, the running track, the climbing wall, the Schooner piano bar or just wander around to see what’s going on. 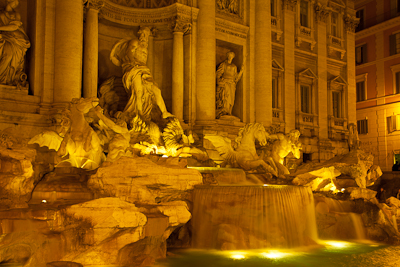 The arrival to Civitavecchia harbor was uneventful, a short train ride on one of the new Eurostar from Rome’s main station Termini. The four days preceding the cruise were just the opposite. My friend and his family had rented an apartment in one of Rome’s loveliest square, Campo de’ Fiori. This proved to be an excellent choice, not just because this came to be cheaper than getting a hotel room but also because the location was hard to beat. Situated in the heart of Rome, a five minutes’ walk from Piazza Navona and ten to fifteen minutes from the Trevi Fountain, Piazza di Spagna, The Vittoriano, Trastevere and its charming restaurants and so much more. The fully furnished and cozy apartment offered a lot in terms of convenience and comfort, therefore our days in Rome, with myself playing tour guide to my American friends, were a non-stopping succession of events which included, of course, tours of monuments and sampling of the local cuisine, with several visits to my favorite artisanal ice cream shop “Gelato per Passione” owned and managed by the lovely Sonia (the Nutella gelato is to die for). We even managed to squeeze a trip to the Medieval town of San Gimignano.

Rome being what it is, the photographic opportunities abounded. The challenge remained finding that original angle to give our photographs a touch of originality to distinguishes them from photos taken by millions of other tourists every year. One can find originality in a fisheye shot taken from the Gianicolo, the famous hill in Trastevere or in a long exposure at night of Trevi’s Fountain. It’s certainly fun to walk the old city, camera in hand, exploring its little streets and many fountains. My lens of choice is my Canon 24-105L, great for most occasions. I would also suggest packing a fisheye and a super wide (14mm or 16mm) and a light, discrete tripod. I do fine with my Gorillapod, although for long exposures you’ll want something bigger and sturdier.