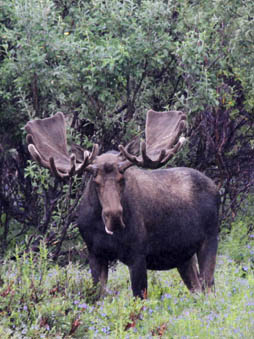 In a well rehearsed goodbye, Mt. McKinley shows its majestic body above the clouds and begs me to come back. I smile at it from my airplane seat and I feel a mix of excitement and sadness as the mountain view recedes from my eyes. My visit to Alaska was short, barely 3 days but it was intense, both on the amount of miles I covered as well as the number of wildlife I’ve seen. The experience quite unique: my first wolves sighting, grazing bull moose, grizzly cubs wrestling, rivers running toward an infinite landscape… Denali National Park conquered my heart. A park that has nothing of the fast paced, bumper-to-bumper, Yellowstone rush hours, a park that was created for nature to preserve itself rather than to become an overpopulated vacation destination. I got a taste of this immense wilderness and I’m addicted. In the next few months I know I’ll be busy planning a return, a comeback in grandeur where I’ll be able to see more, to experience more and to lose myself in a land beyond time; me and my camera. Take only pictures, leave only footprints behind. 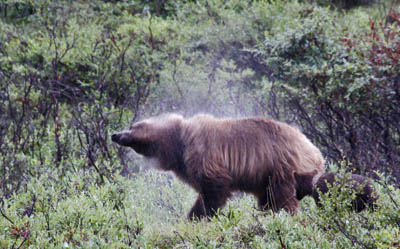 Denali truly is a haven for a landscape, as well as a wildlife photographer. In just a day I saw more wildlife than what I’d see in Yellowstone and Grand Teton National Parks in a year. By mid-afternoon yesterday I watched a large number of caribou walking lazily across a valley, two rams and many sheep, two wolves, ten grizzlies, four bull moose, two golden eagles and so much more. 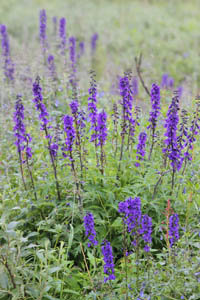 The mountains were hidden by what felt like perennial clouds and the rain was nearly incessant, but that made for richer greens and allowed me to take some spectacular landscape images. If you come here for a limited time, as I did, take a green bus to Wonder Lake and if you’re lucky enough your driver will give you plenty details about the place and will be capable of spotting wildlife before anyone else sees it, mine did. The bus stops whenever somebody shouts “Stop! I saw something!” and that increases the amount of time it takes to get to destination, but remember: it’s about the travel itself. With so many alert eyes on board it won’t be long before you get your chance to come home with the photograph of a bull moose or grizzly you always wanted to take. My personal recommendation is to seat on the driver’s side of the bus, heading west, as you’ll be directly facing a more dramatic landscape as well as areas where the animals are more likely to be. This was just an explorative trip for me, already knowing that I would’ve wanted to come back, and it gave me ideas of what to do next time I visit Denali; how to manage my time in the park; what to do and see and most importantly what to bring. My gear of choice this time was: my Canon 7D (I left the 5D Mark II at home as I wanted the extra reach of the 7D but didn’t want t be bothered by the weight of two bodies), Canon EF-S 10-22mm for those special landscape shots, Canon EF-100-400mm L IS, Canon EF-24-105 L IS. These two ended up being the most used lenses, particularly the 100-400 which made more than one person jealous. Sure, I was wishing I had the new Canon 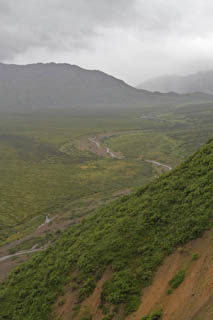 800mm, but how many people can hand-hold that lens for more than 10 seconds without getting tired? (Without even considering the nearly-prohibitive price of that lens ).Also, remember that you’re on a bus for a long time, therefore you’ll have vibrations and bumps and the 100-400 is a lot easier to handle, hiking with the 800mm might not be wise. Moreover, with the 7D crop factor it becomes an actual 160-640mm lens. When the bus stops because of nearby wildlife you cannot get off as park regulations forbids that, but you can get off the bus at any other time and hike from there until you’re ready to jump back on-board, which could be an hour or a week later, according to your taste and preparation
The other accessory that has become essential to me is my Cotton Carrier, no more hiking getting bruises on my neck or back pain (read a review here). I also brought a circular warming polarizer but I never got a chance to use it. With so many wildflowers in July it’s also a good idea to bring a macro if you enjoy capturing the details of plants and flowers. 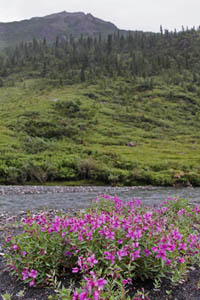