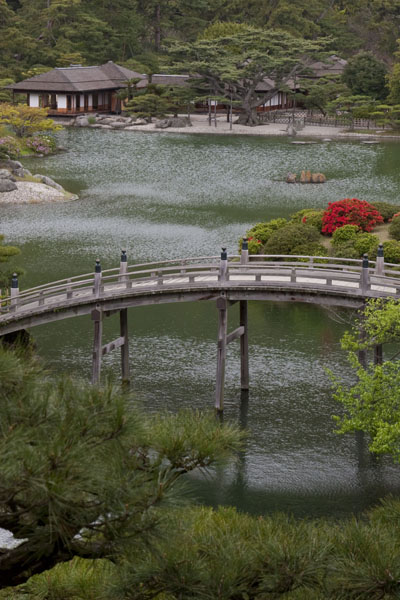 This morning we drove to Takamatsu, a city located on the island of Shikoku (one of the major Japanese islands connected by bridges). The trip took place partly inland, through cities and developed areas and partly through the countryside and coastline, with a total time of about 3 hours. We broke it a little taking a break after crossing the first bridge to rest and enjoy the view of the Pacific Ocean; this was the first time we saw the ocean in Japan. Shikoku is connected to a smaller island, which in turn is connected to the mainland, so to get there we crossed two huge bridges. On the top level are the car lanes while on the bottom level there are the train tracks.

Once in Takamatsu we visited the gardens of the Ritsurin Park, which is pretty famous in Japan for its beauty; as a matter of fact this one is considered one of the three most beautiful gardens in the country. Here we spent a large part of the afternoon. Photo opportunities abound, as every corner seems to offer something special, unfortunately the weather deteriorated, and although it didn’t rain hard, the constant drizzle of the late afternoon made the visit somewhat less enjoyable  from a photographic standpoint.

Being further south we were beyond the cherry blossom season, but a little hint of white on the cherries remained; most of the other flowers had not bloomed yet, late Spring would be a better time to visit this park. Following one of the trails we hiked up a small hill which gave us a bit of a bird’s view of the park and provided a nice location for photographing one of the old-style wooden bridges which decorate the gardens.
Chakie took us for lunch to her favorite Udon restaurant, just a short walk from the gardens. This typical family run soba shop was filled with people sharing tables and counters for a tasty hot meal; no tourists here except for us. This was some of the best Udon I had in the trip, and a large meal was barely $2.40.

On the way back we stopped a few more times to look at the scenery and by the time we got back to Osaka it was already 8pm. Since we were all hungry again (I decided to nickname this trip: “A photographic trip through the culinary side of Japan”) Chakie took us to a sushi restaurant, the type with a conveyor belt. People will seat at a table and there’s a conveyor belt that goes around the restaurant carrying plates. Each plate was 100 yen (about $1) and had 2 large pieces of sushi. The premium sushi are served on a double plate therefore costing 200 yen. One picks up any plate he/she likes and the waitress brings the drinks. Once finished the plates are pushed into a slot on the side of the table where a computer counts them and the waitress brings the check.  There is also a touch screen on which it’s possible to make special orders which, once arrived on the belt by your table, will cause a bell to ring. These are placed on plates of a different color, so people know that it’s a special order and don’t grab it by mistake. I found this restaurant to be efficient, fast, entertaining,  and cheap. We ate a lot and the check turned out to be $10 each including drinks and dessert. Good luck getting any sushi for that price Stateside. If you happen to be in Hawaii look for a sushi restaurant of the “Genki Sushi” chain (on Oahu there is one in the Ala Moana Shopping Center and one in Waikiki; on Maui there’s one in Lahaina), it works on the same principle.

Once back to the hostel we hugged Chakie goodbye, thanking her for the great hospitality, with the promise that we won’t wait another  ten years before we see each other. We went to bed excited at the prospect of visiting Hiroshima the next day. No earthquakes tonight. 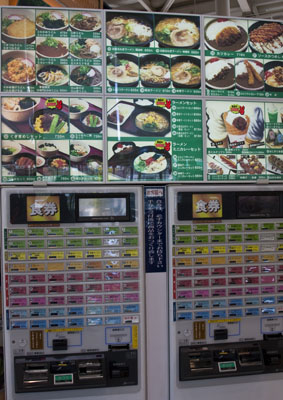